So since we’ve been in need of some good news, we wanted to share with you how wonderful our Ivy girl is doing!  (this is news that makes us very happy!)  We’ve been in touch with her adopters, and actually ran into them at Barcstober fest this past October (she was adopted in June 2011).

Here’s what they had to say:

After a bit of a rocky start, mostly due to our learning curve as new dog owners, Ivy (aka puppy) has settled in and we can’t imagine our lives without her. Even during the rocky start we were so torn about what to do because she’d wiggled her way into our hearts in such a short time … and when I say wiggled, I mean full body, butt almost hitting the head, wiggle! there’s nothing better than coming home to that every day! 🙂

Ms. Ivy has attended and graduated from obedience training (the only one to graduate that day!) … and is a lady on leash and off, except for sometimes when her ball is involved, but she’s getting better at sharing! Boy, does she love her ball … and puppies. She LOVES puppies … and could play with them for hours. Also, when she’s really excited on a walk, she does this little bunny hop thing, which couldn’t be cuter. After a long walk or romp with her ball and friends, she likes nothing better than to curl up with one of us or her blanket(s) for a looong nap. 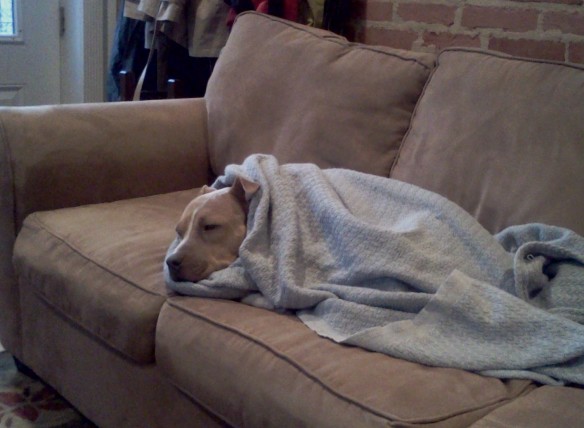 I, like another previous foster update, was strictly against allowing our dog on the couch. She was going to learn to love her plush dog bed, darn it!! THAT lasted about as long as i could stand that gorgeous face staring at me in bewilderment. those ears!! She was on the couch within a couple of weeks … and remains there to this day.

This was our first christmas with a dog, so we weren’t sure what to expect with regards to the tree … but so far, aside from thinking the tree skirt was yet another blanket for her, she hasn’t fussed with it much. Every now and then I’ll find her sitting awkwardly underneath it … and have seen a few episodes of butt scratches on the branches, but mostly she leaves it alone. We (meaning my husband) thought we would need a fake tree from now on, but he seemed to have forgotten that our puppy is such a lady.

Anyway, I’ve gone on too long … but just wanted to take one more minute to thank you for all that you do for this breed and for all your support during those first couple of weeks when we had Ivy. You were extremely reassuring and I can honestly say that your support (along with MABB) is one of the reasons we are still the proud owners of a fantastic dog!!  Thank you!

Oh, and I’ve attached a few photos if you want to share … 🙂  Sorry for all the sleepy pictures, but she spends a lot of time doing that!

We are so glad to hear how well Ivy is still doing.  We’ve been taking a lot of time this weekend to think back over all the dogs Knox has been a big foster-brother too, and Ivy was one of his favorites.  Despite the rocky start, C & E, Ivy’s mama and dad, are the epitome of committed and loving owners.  The second an issue came up, the communicated it with us, MABB, and got right to the trainer.  Because of their commitment, consistency and love for Ivy, she is now doing fabulous.  Now THAT is a happy ending that puts a smile on Knox’s face.

6 thoughts on “An update from Ivy”