TREY the Husky
Our first foster, Trey, happened to be a Husky. And what a story this one has. We weren’t really ready to start fostering when Trey came along. It was Thanksgiving, 2010, and I had volunteered to do a transport. A friend in the rescue world had recommended transporting dogs as a great way to volunteer without actually fostering. I wish I did more of them but we sort of got right into fostering. (If you are interested in transporting, message me and I can give you more information). 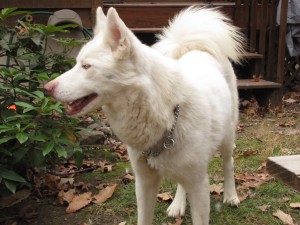 I volunteered to do the transport the Saturday after Thanksgiving, but BARCS was so full, they needed that husky out ASAP to make room for incoming dogs, so we volunteered to take him for Thanksgiving weekend. Oh what an impression this guy made on us. We picked him up on Tuesday night. He was completely starving, skin and bones. He was removed from a home with several other dogs in Baltimore City, two of which were found dead. One was shot because that dog and the Husky “fought over some food” that was thrown at them. The owner (who was then arrested) shot the other dog. Husky survived but not without issues. He had some serious food aggression, kennel cough and worms. Talk about an ‘easy’ first foster. We were way out of our league, and with no rescue group to support us (he was making his way to a rescue in NY), it was a long few days. The first night went without issue. We kept him and Knox pretty separated, only interacting on walks, through a babygate or on leash. Trey was a sweetheart inside, but had come from a bad situation and needed some time to recover, obviously. 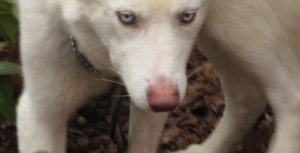 The second night was different. Being a Husky and starting to be attached to us, he howled all night. We came down at 2am to check on him. We didn’t sleep. Is this what fostering is going to be like? Wow. We may have made a promise we were not going to be able to keep. He seemed okay. He quieted down. We woke up in the morning to a scene. He had pooped everywhere. I had no idea how much mess a dog could make in a crate. It was on the carpet, crate, ceiling and all over him. Happy Thanksgiving. Well, my wonderful husband ‘volunteered’ (ha!) to give Husky a bath. They bonded. Husky loved the bath. We had a long morning before our trip to spend the Holiday with my father in law, but in the end it was a great (but extremely long) day. We survived our weekend and I am happy to report that Husky grew leaps and bounds at the Long Island Husky Rescue and is doing great.