Among other things, we’ve been busy prepping this big guy for our little Bambino on the way.  We’re sorry we haven’t been around much! … ok ok … like at all…

Mostly, we’ve been working on Chocko’s basic obedience, leash walking, and bestest house manners…but we’ve also been doing a crap ton of reading.  We read articles, books and tons of info on the interwebs, especially how our keyboard pals Chick & Dude prepped for their own little human puppy.

We’ve even been listening to babies,

Yes, that’s a used wet diaper thanks to good neighbors 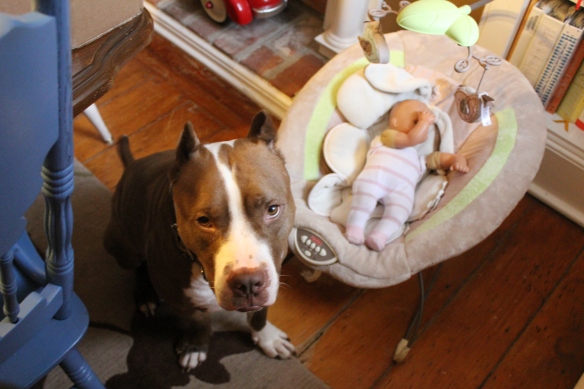 fake babies are pretty interesting to this guy

But the best practice of all, has been meeting babies.

Mama A and Baby E 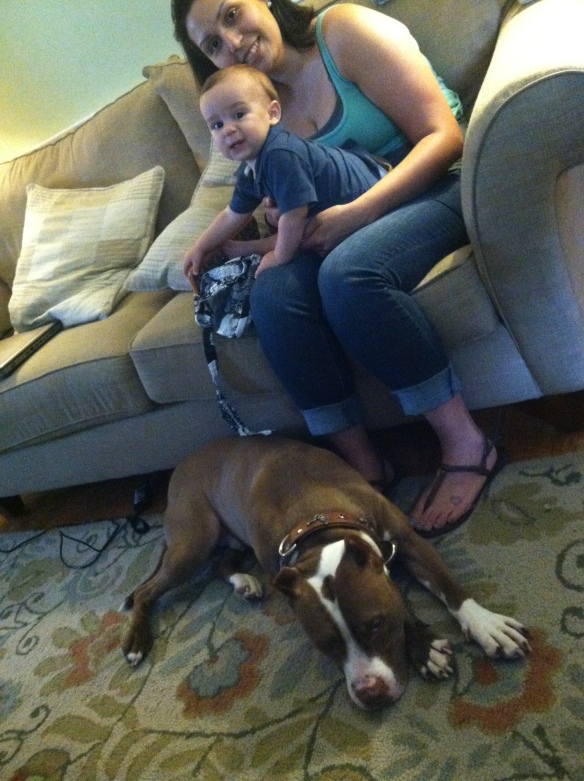 Now Chocko wasn’t this calm the whole time… this was the only few minutes I felt I could take a step back and whip out my iphone for a few quick pics to share with you guys.  Mostly he’s just really excited/overstimulated/curious about toddlers…Luckily, our Bambino won’t come out crawling around so hopefully that’s a plus!  He gets sorta anxious/starts panting and whining because he wants to be all up in baby’s face and we won’t allow that. The more exposure now, the better, but I’m still hopefully when it’s OUR baby he’ll be a little different… time will tell!  Huge thank you to mamabear A and her mini human, E for helping the Chockster with more exposure 🙂 thanks friends!

For those of you out there that have brought a human baby home to your adult dog- how were you feeling before?  And how did that rank to what actually happened?  I’ll be honest and say it’s one of the biggest stressors for me- making sure this is as easy of a transition for the furkid as possible, and making sure I’m setting him up for success.  I’m hopefully I’m going overboard for no reason at all, but I guess that’s still a good thing! I’d love some feedback from you all!

Last week Doodlebug challenged us to work!  Well, we are not ones to step down from a challenge, so we took his orders very seriously.  We used his magical formula: 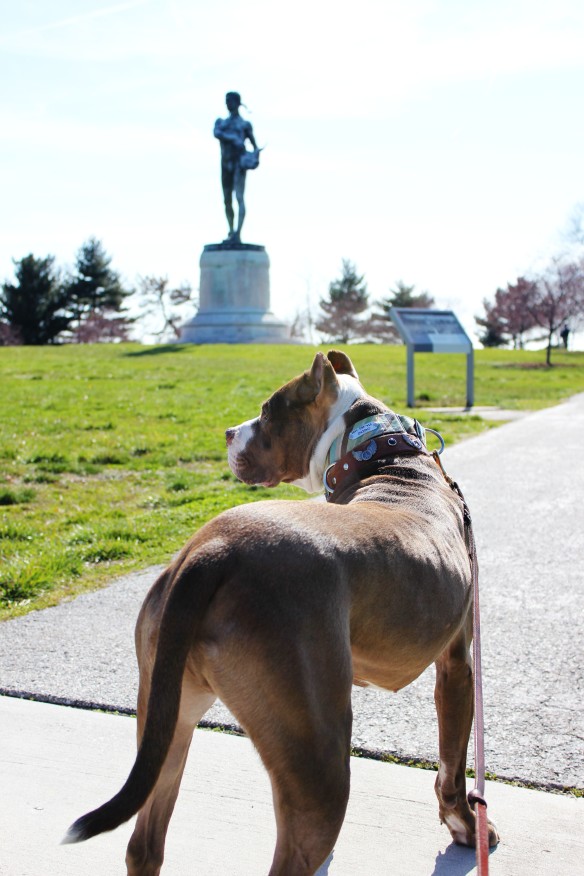 Exposure to a Challenge: Check 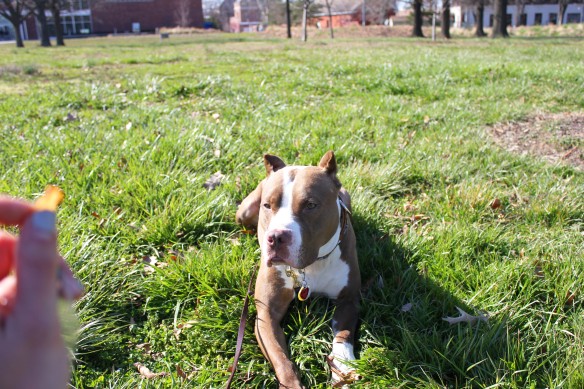 We headed just down the road to Fort McHenry (remember when we took Bodie this time last year?) which is a wonderful place for us to visit.  The #1 reason?  No off-leash dogs!  Baltimore city is pretty notorious for off-leash dogs in the wonderful public parks (which we tend to avoid…sad face…due to all the unwelcome approaches), but since Fort McHenry is a National Monument, there are actual Park Rangers, which take the leash laws pretty seriously.  So, we realized we need to get here more often.  I’m embarrassed to say this was Chocko’s first visit, but it certainly won’t be his last!

We knew just being in a new place would provide many challenges, and though we didn’t have any dog on dog interactions, (I think it would have been too much for him this first trip anyway) we had some unexpected (but welcomed) challenges!

First, that Kite!  A bright pink thing that whizzed in the sky, bombed the ground and made very odd noises… Chocko was very distracted and confused by it.

Here he is, in a deep trance, staring at the pink whizzer.

We also had obstacles such as….water!  I never would have imagined how distracted this guy would be by the splashing waves along the seawall. 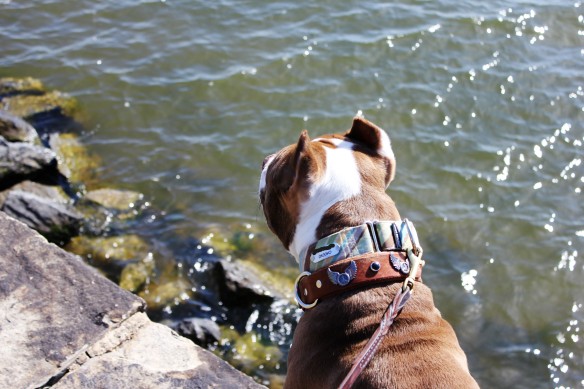 We embraced these two unexpected challenges and were able to work through them and get him to focus on me (still working on the ‘watch’ command) and walk with a loose leash.  Though it wasn’t immediate, we did succeed! 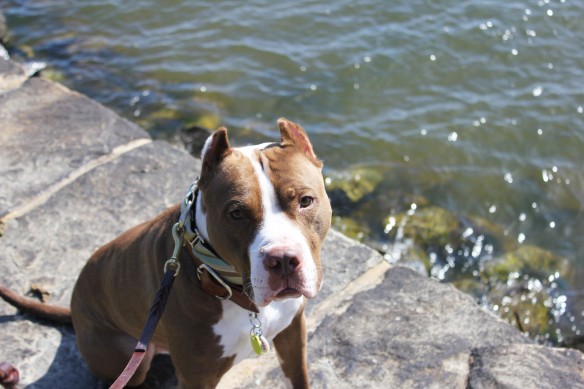 Focusing with the splashing water in the background

Here he is doing a down stay (the down is quite difficult for this guy, as you can see from the awkward pose) with the kite in the distance.

And a few prettier stays 🙂 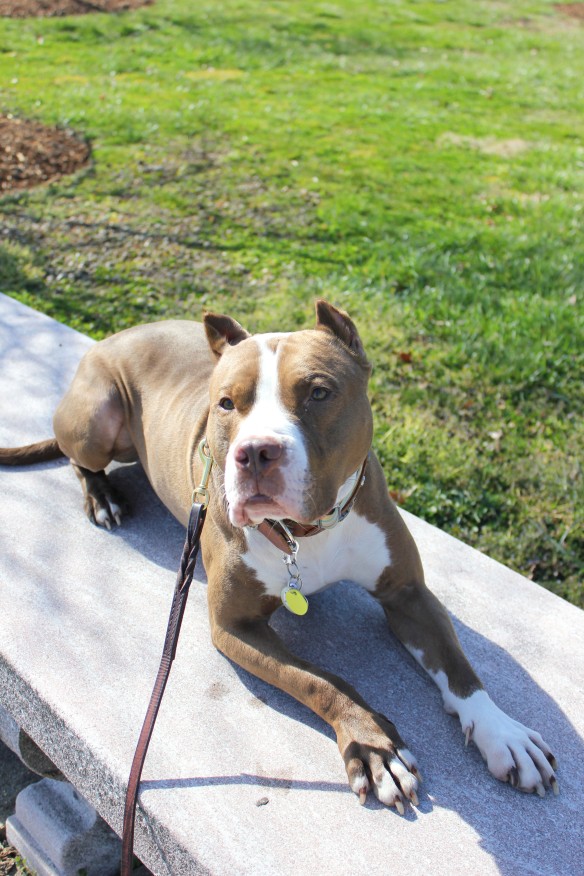 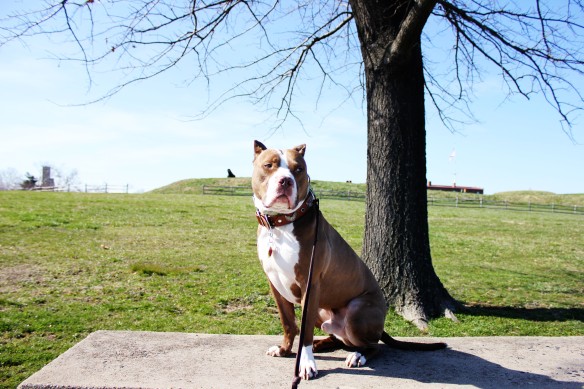 We incorporated all the elements and had an awesomely successful trip!  Chocko was praised with treats, love and playtime in between and during training commands and challenges.

And how do we know just how successful it was?  By his epic sun-spot nap, of course! 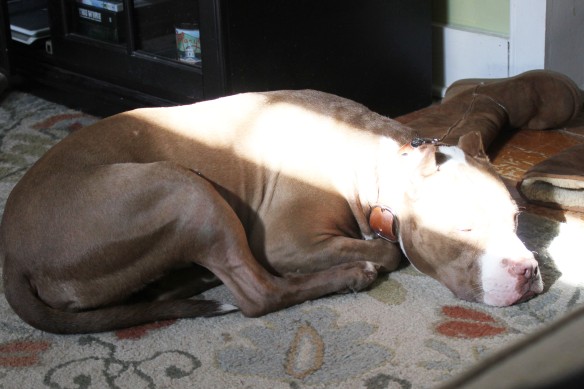 Thanks for the challenge, Dude!  We’re looking forward to many more walks at the Fort to practice in the near future!

So remember a few weeks back, I told you all we had some announcements?  Well, we’ve told you about how temporary fostering went (2 thumbs and 4 paws up!) and about how much time Chocko’s been spending at the gym, but there’s still a few things we’ve been holding back!

Today we’re coming clean about Chocko’s personal space.  I’ve been meaning to post about this for abouuuuuut 4 or 5 months…oops?  I guess I was hesitant because, well, let’s be real…I didn’t want him to have ‘issues’ and I was in DE-NI-AL about his leash reactivity. As you know, Knox was pretty much a roll-with-the-punches guy and nothing really rustled his feathers…like at all.  I was thankful.  And spoiled.  I knew there were ‘reactive’ dogs, picky dogs, dogs that needed special accomodations…I never imagined I’d own one.  Well, I do.  And he’s awesome.  He just…likes his personal space when he’s out on walks.  I’m ok with that, most days.

A few weeks ago our virtual buddies over at Love & a 6 Foot Leash posted a PSA about dogs who have preferences; both Sir Chick and the ‘Dude, renowned Wonderdogs, admitted their limits, so figured it was about time to do the same over here!

Now we didn’t know Chocko was leash reactive at first.  And he’s only reactive sometimes.  He doesn’t make any loud noises, scary barks, or show teeth.  Which tends to deceive walkers, thinking he’s all approachable and wants to say hi.  Well, I learned that is not the case.  We adopted him in July, and it took a little while for his ‘reactivity’ to really show up, by October, it was clear to me that Chocko had a serious pet peeve:

Face to Face on leash greetings (the kind we run into kinda all the time turning a city block)  are his least favorite thing EVA.  You could see how a girl could be confused though, right?  I mean check him out below.  This picture was from October, at BARCstoberfest.  A crazy crowded scene full of dogs, and he does great in those settings.  He then ran with a MABB foster (Julius, who has since been adopted) in his first 5k, also kicking butt!  The day went off without a hitch. 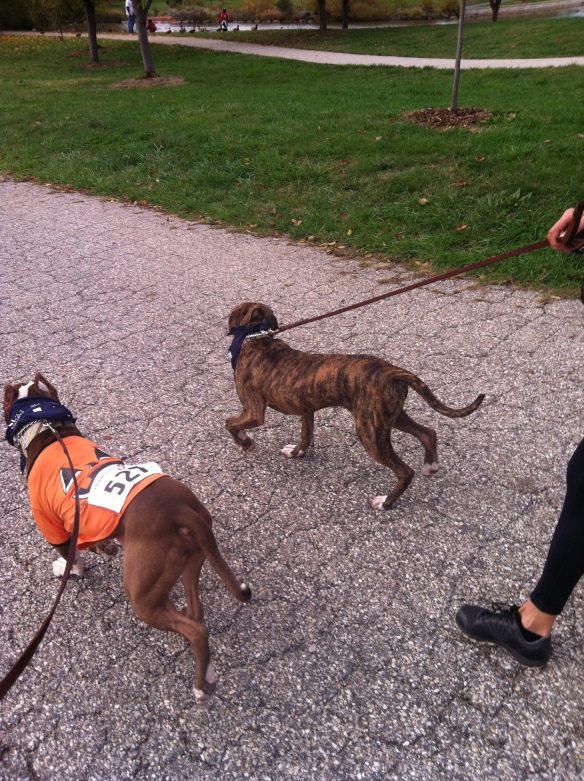 So really, it just took me a little longer to realize, look into (aka research) and acknowledge that those ‘boo’ turns around the corner that leave you face to face with another dog OR the loooooong, drawn out, face to face approach (his 2nd least fav) when you can’t jump into traffic, are not his cup of tea.  Do I know what goes on in his big blocky head?  No, I don’t.  I’m not an animal behaviorist, or a trainer, or an expert.  Clearly it took me quite a bit of time, with my lack of experience, to realize my dog’s needs.  My guess?  He’s a big wus.  I think he’s super intimidated and finds the need to ‘puff’, a kind of ‘I better get that guy or he’s gonna get me’ posture.  Either way, he certainly gets his point across, a big “get the f out of my space” (sorry for the language, but he doesn’t say it gently either, and that’s exactly what words I imagine coming out of his big mouth).

Once he’s introduced, he’s golden.  A little co-walk a few feet apart, followed by allowing him to be in the rear (and sniff the air a bit) then he play bows and rolls on his back, which he does often with his pals.  It’s his magic recipe.

Honestly, I’ve figured out what he needs, and we’re still working on getting him to not act on his impulse, ensuring he feels comfortable (and that it’s my job to protect him, not the other way around), and hoping he trusts us not to put him in a situation that makes him feel unsafe.  Sometimes, it’s out of our hands, but luckily we’ve been able to manage ok (maybe not ideal?  But good enough).  I’ve ensured that so far, since October, he has never been able to get face to face with another dog on leash without a proper intro.  I think that’s a success.  But we get hit with the random corner turns, and those get me in a funk.  He doesn’t do ‘perfect’ and sometimes neither do I.  We are a work in progress.  Which is ultimately why we haven’t fostered full time yet.  It’s not because he’s not good with dogs in the house, it’s because I can’t walk two big dogs at one time (and remember, that’s the only way anyone gets any potty breaks or excercise since we are yard-less).  I also don’t have the luxury of walking them separately with my work schedule so, fosterless we will remain until we are a little closer to perfect.

I know I know, we’ve been MIA.  It’s not the end of it either.  The humans are keeping up an insane schedule this summer so despite the expected lack of posts in the coming weeks, I promise that Chocko is getting everything he needs and more right now.

ready for my walk!

Our big boy is getting training walks twice a day, and also is going to his basic training class on Wednesday evenings.  He’s such a superstar, but there are definitely areas where he needs improvement.  His sit-stay?!  phenomenal!  Heeling?  Amazing… unlesssss another dog happens to be approaching.  This is his big obstacle.  He’s reduced his reactive distance down to about 6 feet, but that still won’t cut it here on our city streets where every turn brings a new dog.

He doesn’t wig out… he just postures, pulls, and sniffs – 98% of the time.  But because I have high hopes of fostering with him in the next few months, the rule will be no approaching other dogs until I say it’s ok (can you imagine me walking two unruly pitbulls down the street, dragging me around?!  Not the best public image, huh!).  So until he gets this rule, no leash hellos for a while.  And he’s doing better than I ever imagined!  The blanket rule- no saying hello to anyone (even to his buddies) is helping him so much.  Oh and hot dogs.  They help too.

And his ball.  His green ball.  That helps a lot.  Did you see the post from Love and a Six Foot Leash?  That inspired us to be ball walkers.  Doodlebug is so helpful.  Thanks Dude!

He’s such a natural!  You’d think he’d prefer a smaller ball but no…this is his favorite.  The Cuz, minus the legs.  Whatever works, right?!

I got the sit-stay down ma, can we WALK now?!

Anywho, thanks for bearing with us over the next 8 weeks.  Life is crazy right now – as in completely over-booked.  And after a long work day, the Chockster demands a long walk, belly rubs, and lovin’ – sans laptop.  So, you’ll still be hearing from us (and if you’re not a fan on our facebook page, head there since there are plenty of quick updates always!) but not at our typical few-times-a-week posts.

Thanks for hangin’ with us friends!  We’re off to walk!